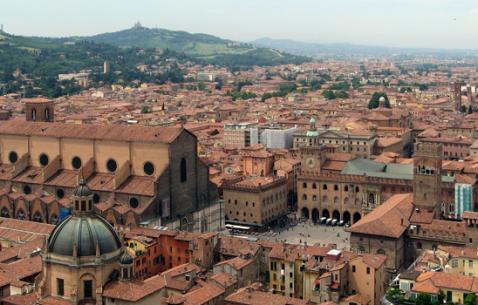 The city is an impeccable fusion of old and the new and it portrays a number of facets thereby giving it the following names: La Grassa or the fat one as a result of its rich food legacy; La Dotta or the learned one as it houses one of the oldest universities of Italy and La Rossa or the red one this comes from cities terracotta buildings. Whatever name you call it, Bologna is sure to let you live every element of the city.

Bologna dates back thousands of years, is conveniently located and is an important junction for rail and road. Adding to the many names the city already has, Bologna can also well be called the Manhattan of the medieval era with about hundreds of towers in the city- displaying the prestige of the family. With just about 17 of them that survived, the towers of Asinelli and Garisenda flash the pride of Bologna and invite you to climb the hefty 90 meters to witness a post-card view well worth the climb!

Adding to the picture perfect views in your Bologna trip is the its Porticos; created in the middle ages a way to widen the space for housing without taking too much of the street area. Piazza Maagiore the main square has most of the major monuments of Bologna and is the meeting point for the locals and tourists alike with various events held throughout the year.

There are always things to do in Bologna; on one hand we have Piazza Santo Stefano a complex of religious building and on the other hand Lamborghini Museum showcasing state of the art technology behind the world class automobile.

Essential travel information and Bologna tips for your visit

Plan Your Trip To Bologna

The best tours and activities in the city, guided by experts to give you a local insight to the best of Bologna