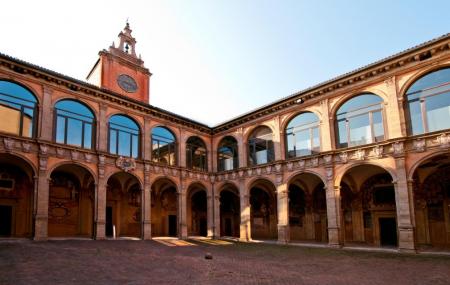 Bologna was the first European town to have a university and this being the first university of bologna brings you to the intellectual side of this red city. Though heavily destroyed by bombing the Archiginnasio was restored to its present form and is now the seat of the Municipal library.

As in most of the Bolognese architecture there is a portico at the entrance which opens to the main building. The university consists of two levels – walls of which are painted with symbols of alumni- an internal courtyard covered with a canopy suspended between the statues of 2 men, on the other side is the impressive Anatomical theatre shaped like an amphitheatre made of fire wood and a coffer ceiling. The teatre houses a number of statutes out of which two represent: Hippocrates and Galen, the most prominent physicians of Greece and Rome.

A winding staircase leads you to the upper hall which was a study place for artists and jurists. Another main attraction is the Stabat Mater which was the main lecture room, this is still used for a number of gatherings.

The walk around the building will show you how ancient Bolognese regarded science and research such an important part of development. With the paintings all over the wall one can feel the presence of all the students and the zeal with which they carried on all the research. Also, visit the popular attractions in the city by following Bologna itinerary 3 days.

How to Reach Archiginnasio Of Bologna

63.85% of people prefer walking in order to reach Archiginnasio Of Bologna

People normally club together Compianto Sul Cristo Morto and Museum Of The History Of Bologna Or Museo Della Storia Di Bologna while planning their visit to Archiginnasio Of Bologna.