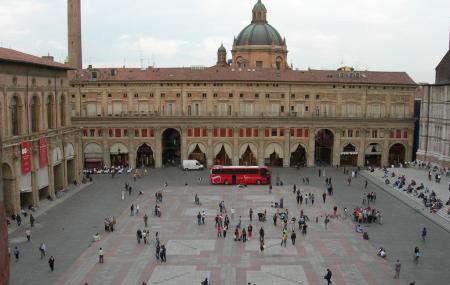 A lively pedestrian hub and the starting point for everything Bologna! In the medieval ages Maggiore was the seat of city government and was acquired to make a market place, because of which a number of buildings around the square were taken down giving us this massive space.

Piazza Maggiore till date holds the same importance as it did in the 13th century. Surrounded by some of the most important monuments of Bologna like- Palazzo del Podesta in the north of the square built in 1200, Palazzo Comunale to the west right in front of Palazzo del Podesta, towards the east we have Palazzo dei Banchi, Palazzo dell’Archiginnasio which is now a library with largest collection in Europe. In the centre is a raised platform where small events take place.

As a traveller it is an ideal place to either start your journey through the beautiful city of Bologna, to take a break and let the time go by, to relish a great meal  or to simply enjoy an event going on in the centre. Whatever your reason may be to visit Piazza Maggiore it will help you witness the rich heritage of Bologna along with a chance to meet locals and learn customs and history of this wonderful city. Also, visit the popular attractions in the city by following Bologna itinerary 3 days.

How to Reach Piazza Maggiore

83.51% of people prefer walking in order to reach Piazza Maggiore