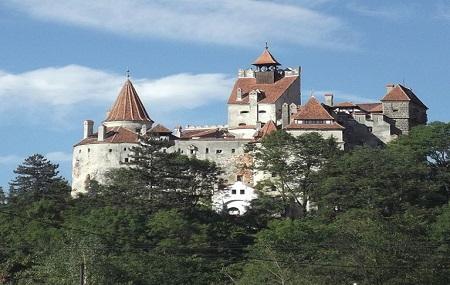 Bram Stoker- the author of “Dracula” never visited Romania but walk into the Museum Medieval Bran and you are sure you have landed at the Dracula castle! The novel describes Dracula’s home as a run-down castle perched on top of a mountain in Transylvania and over time the resemblance to the place gave it its haunted name. Today, a tour of the castle takes you through true-to-time interiors. The original furnishings, chandeliers, wooden accents, carpets and other vintage items still grace the castle and with the lush-green castle grounds, complete the picture.

The bedroom, kitchen, corridors and the historic items that are placed here, spin a story unlike any other place in the city. During the day, the castle makes for a pleasant visit with the view of the mountains adding to its charm. However, with a little bit of imagination, you can almost see the Dracula roaming the castle grounds after dark! The castle dates back to the medieval period and stands on a mountain with an elevation of 2500 feet!

During the early 13th century, Teutonic Knights built its original structure that was destroyed by the Mongols in 1242. The castle was again built in 1377 and it was used to fight of the Ottoman Empire during the 15th century. It was later owned by the Hungarian Kings before it was handed down to Brasov city. Since 1920, the same castle has been home to the royal family of the Kingdom of Romania. During the course of history, it has been the home of Queen Marie and Princess Ileana- two of the most iconic personalities of the city.

How to Reach Bran Castle