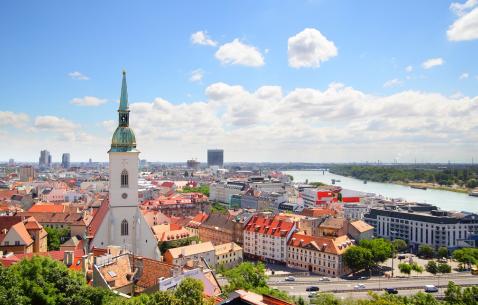 Bratislava spins its magic like no other city in Slovakia (known locally as Slovensko) - embraced by Danube and Morava, iconic Bratislava Castle, exclusive nature trails which meander through its brilliant mountains and an urban ambience which lights up after dark! The city’s medieval influences still stand true to its time and a Castle around the Danube is simply the tip of the iceberg!

The rivers which flow through the city, the untouched mountains, the skiing resorts - all make for a great way to experience Slovakia outside its stereotypical definition and really highlight the city on the world map.

However, Bratislava is best loved for its contrast- the medieval time influences seen in its fortifications, old-houses and cobbled streets and the juxtaposed 21st century architecture, lively night scene and a modern art explosion witnessed in its many art galleries.

Playing an important role in shaping the country to its present day, the city still carries its influences in its arts, architecture, culture and even administrations across ages, periods and eras and even today its historic charm is inseparable from its vivid personality.

Bratislava roots its tourism in this very charm and if you are looking for a place with a rich history, raging art pulse, blooming natural trails and magical skiing resorts, a visit to the city will make sure you leave wanting for more. To make the most out of your stay in the city, read on to know what not to miss when in Bratislava.

Essential travel information and Bratislava tips for your visit

Plan Your Trip To Bratislava

The best tours and activities in the city, guided by experts to give you a local insight to the best of Bratislava