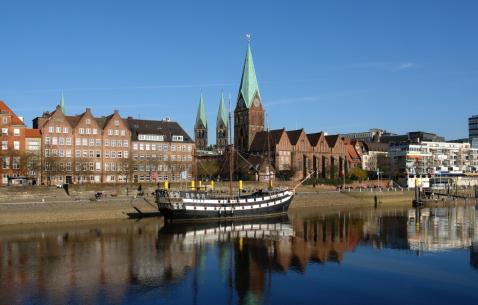 Stretching along both the sides of river Weser, Bremen is a major commercial and port town located in the Northwest of Germany. The city possesses a perfect blend of historical value and industrial sophistication. Bremen is known for its aerospace and trade industries. It also gained popularity for academics with the University of Bremen, one of the top 11 elite universities of Germany, catering to the educational needs of thousands of students from about 126 countries. The city has also been concentrating on tourism development by emphasizing on its cultural and architectural aspects.

The earliest settlements in Bremen date back to 12,000 BC. Trade only began to flourish after the Bremen walls were built, and the city became a political body with its own laws. Between the 14th and 17th centuries, it was an active part of a medieval trade guild known as the Hanseatic League. Initially ruled by archbishops, the city was reformed into the Duchy of Bremen in 1648. Political manoeuvring navigated Bremen through the Thirty Year War, and at its end, saw it established as a Free Imperial City. In the 19th century, the harbour of Vegesack became a part of Bremen.

The itineraries of Bremen has a lot more to offer than a common tourist town. St. Peter Cathedral, a gothic style church is encrusted like a radiant gem in the town’s marketplace. The thriving art scene of the city is reflected in the sculptures of the cathedral, the swineherd and musician statues inspired by the Brothers Grimm fairy tale.

Bremen’s streets reflect the architectures of Art Nouveau, Art deco and the Renaissance eras. The twisted lanes of the city are filled with a number of quaint cafés, restaurant and stores for shopping. This vibrant town offers its tourists a lot of activities to do and you’ll thoroughly enjoy it.

Add Bremen to your vacation planner your next holiday and spend some quality time taking a walk along the promenade on the banks of river Weser, chill out at their cosy bistros and of course, taste their famous Becks beer.

Essential travel information and Bremen tips for your visit

Plan Your Trip To Bremen

The best tours and activities in the city, guided by experts to give you a local insight to the best of Bremen