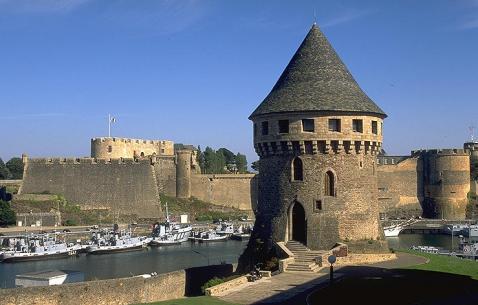 Curled up in one of the most beautiful natural harbours on the West Atlantic Coast, Brest is a city in the Brittany region of France. Its harbour is regarded as one of the most important ones in the country, and following Toulon, it is the second Military port for the French. The city earned a respectable name for its service sector, academics and developing tourism. With a great historical heritage and impeccable architecture in the city’s monuments, Brest remains on the itinerary planners of many tourists.

The earliest known records of Brest trace back to 1240AD. In the 14th century, English took over the city from John IV, the Duke of Brittany. Brest became a part of French Crown after Claude was married to Francis I of France. The harbour was first constructed in 1631 by Cardinal Richelieu after which it served as the French naval base. Unfortunately, the city was heavily destroyed during the World War II but was reconstructed later.

The itineraries of Brest involve picturesque landscapes and captivating waters of the Atlantic. Apart from whatever is left of the World War Bombings, the city’s major tourist attractions involve the wealth bestowed upon it by the nature. The city is embedded with the fortifications and relics from the history and cobbled stone streets lined up with the residential spaces on either side.

Brest is also considered as a famous university town with the University of West Brittany and many other prestigious educational institutions like ÉcoleNavale (the French Naval Academy), Télécom Bretagne and the Superior National School of Advanced Techniques of Brittany established in the city. These academic centres cater to more than 23,000 students who cross your path very often. The city also takes pride in its naval academy and the Océanopolis, a one of its kind ocean discovery centre in Europe.

Include Brest to your vacation planners this holiday season and enjoy a laidback vacation with your loved ones. Tour around all the important places to visit in the city and embrace the city’s culture. You can always get to the tourist information centre at 8 Avenue Georges Clemenceau if you have any queries. During the evenings, take a stroll on one of the beaches looking out at the pretty buoys in the sea. Or just visit a local café and nibble on some of their delicacies and indulge yourselves in some of the fun-filled activities to do along with the locals.

Essential travel information and Brest tips for your visit