Basilica Of The Holy Blood 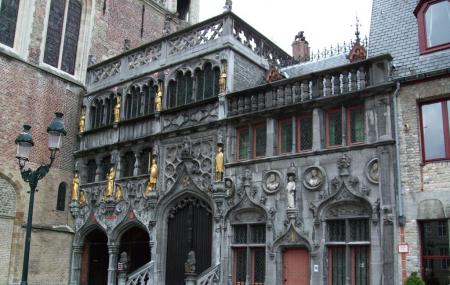 Find hotel near Basilica Of The Holy Bloo ..

Some of Europe's biggest draws are their gigantic cathedrals built in a range of styles overwhelming their viewers with beautiful architecture. Yet there are many small churches that enjoy a similar popularity. Some are very picturesque, and some are a little museum like, they contain an artefact of a work of art. The Roman Catholic Church, the Basilica of the Holy Blood is both those things. Built in the 12th century by the count of Flanders (the region Bruges is capital of) the church was built originally in the Romanesque style, and the lower chapel remains the same, but the upper chapel was rebuilt in the original Gothic period in the 16th century and its 19th century revival. The upper chapel also houses the sacred relic of the basilica, the eponymous Holy Blood, a vial of blood from the body of Jesus Christ brought to Flanders by the builder count Thierry who fought in the Second Crusade.

The relic of the Precious Blood is a very important aspect of the townspeople's religious culture and history. Since the start of the 14th century a procession, celebrating the fight to end French despotism by two Flemish heroes, has used the Holy Blood as its centre piece. This procession is held every year on Ascension Day (the day Jesus ascended into heaven) which usually falls in May, and sometimes in June.The shrine itself is a work of art, made in the early 17th century it contains more than 30 kg of gold and silver and over a hundred precious stones. In the lower chapel a simple relief of the baptism of St. Basil carved above the entrance of to the annex of the church dating back to the 12th century is of note. Just as simple yet striking is the 14th century sculpture of the Madonna and Child tucked away in the right side of the church.

Entrance Ticket Details For Basilica Of The Holy Blood

Basilica Of The Holy Blood Timings

How to Reach Basilica Of The Holy Blood

Love this? Explore the entire list of places to visit in Bruges before you plan your trip.

Fancy a good night's sleep after a tiring day? Check out where to stay in Bruges and book an accommodation of your choice.

88.92% of people prefer walking in order to reach Basilica Of The Holy Blood

People normally club together Belfry And Market Hall Or Belfort And Market Hallen and Bruges Waterways while planning their visit to Basilica Of The Holy Blood.