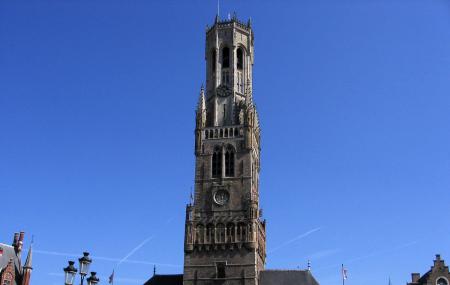 Looming at the heart of the city stands the Belfry of Bruges. With its 47 bells atop the 83 meter structure and steep stairway, the bell tower is one of the most recognizable and immortalized structures of the city. Formerly used as a treasury, a store for the city’s archives and a look out spot, the Belfry has become one of the city’s most popular tourist destinations due to its ancient architecture and the stunning view it provides.

The history of the belfry is marred with accidental destruction. Ever since its addition to the market square in 1240, the tower had fallen prey twice to devastating fires and once to lightening. Despite it all though, the tower still stands, strong and stern, looking over Bruges. The upper stage of the Belfry is octagon in shape and the rooftop is decorated with a Gothic styled stone parapet. The architects attempted to add aspire to the towers two times but lightening destroyed the first while flames consumed the second, after which all attempts were abandoned. Because of this, the tower that stands today is actually a little shorter than the Belfry of old.

The Belfry has always been an important part of Bruges. Since its inception, the tower has acted as a clock announcing the time with a resonating chime, as a fire alarm and as an indicator of numerous political, social and religious events. By the 16th century, the bells could be played by a hand keyboard and tunes were played throughout the city during special occasions and holidays. After a terrible fire in 1741, the bells were replaced and today, there are 47 bells, each of a varying weight, from two pounds to 11,000 pounds!

Visitors will be faced with a tremendous climb up 366 tapering stairs which wind up the bell tower. Those who are able to make the climb will be treated to stunning panoramic views of the city that stretch for miles and miles. At the second floor is the treasury, in which lie seals and charters protected by wrought iron grills. The Market Hall is now used as an exhibition centre managed by local art dealers. This beautiful historical monument is a must see for those travelling to the city.

Love this? Explore the entire list of places to visit in Bruges before you plan your trip.

Fancy a good night's sleep after a tiring day? Check out where to stay in Bruges and book an accommodation of your choice.

People normally club together The Markt and Basilica Of The Holy Blood while planning their visit to Belfry And Market Hall Or Belfort And Market Hallen.