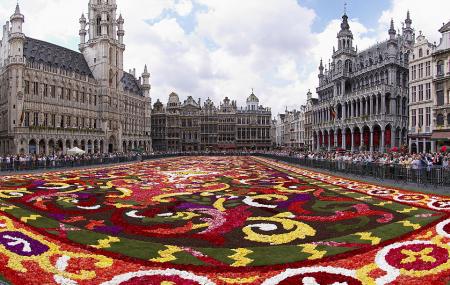 At first the site of various markets, the Grand Place gained political importance once the Brussels City Hall was built here. Still, seeing the ways it was almost destroyed, it’s almost surprising that the Grand Place exists today. The French Army flattened it in 1695 with cannon and mortar fire. It was rebuilt more harmoniously (but with clashing architecture like Baroque and Goth) before being ransacked again in the 18th century by French Revolutionaries. It was built back again in the 19th century and this time it persevered. Today it’s known as one of the most beautiful squares in the world. In 1998, it was named a UNESCO World heritage Site. As different parts of the square catered to different markets, the names of the streets leading off from the square still reflect the items once sold off their respective corners.

As a hangout, the place is sort of unbeatable, especially in the evening. The square and its pretty buildings are all enchantingly lit up. And if you’re lucky, you might catch a music and light show. Also, there’s a daily flower market there that always delights. You’ll find people lounging about quite readily in the square. It’s always lively. Do check out the City Hall which is 96 metres high and capped by the statue of St. Michael killing a demon. A symbol of municipal power. And also the Breadhouse which is also called the King’s House or the Maison du Roi. Built as a symbol of ducal power. Every two years, a flower carpet of a million begonias are set up to cover the whole square – an event very popular with the tourists. Also, visit the popular attractions in the city by following Brussels itinerary 2 days.

How to Reach Grand Place

Love this? Explore the entire list of places to visit in Brussels before you plan your trip.

Fancy a good night's sleep after a tiring day? Check out where to stay in Brussels and book an accommodation of your choice.

58.1% of people prefer walking in order to reach Grand Place

People normally club together Cathedral Of St. Michael And St. Gudula and Galeries Royales Saint-hubert while planning their visit to Grand Place.

People also prefer to start their day with Grand Place.