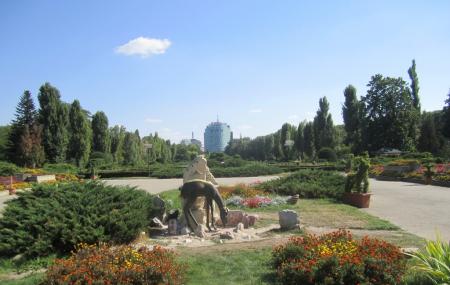 Almost 70% of this park comprises of Herastrau Lake, around which the wooded areas grow. Before we speak of the park's recreational opportunities, you should know that human settlement has been discovered in this park that dates back to the Paleolithic era. Bones of the extinct woolly mammoth have been found here. Also found are coins from the first century BC parts to be from the Dacian settlements of Herastrau.

Sunday afternoons, most of the city's residents retreat to this park for leisure, and yet it never feels crowded. Check out the bronze statue of Charles de Gaulle, widely known as the third ugliest statue in the city. There are also statues of other historical figures everywhere. There's an Adventure Park for kids with trails of various difficulties. there's an aquarium with hundreds of marine animals and plants. There is an open-air Summer Amphitheater. Close to the Hard Rock Cafe there will be a jetty from which boat trips can be taken out into the water. Check out the gorgeous Island of the Roses. A 6 kilometers cycling and jogging track circles the lake; during summertime cycles can be rented from the park entrance.

Hands down the best time to be at this park is during summer nights, when the local clubs all set up stages and turn the entire park into a party area. Also, visit the popular attractions in the city by following Bucharest itinerary 1 day.

How to Reach Herastrau Park

Love this? Explore the entire list of places to visit in Bucharest before you plan your trip.

Fancy a good night's sleep after a tiring day? Check out where to stay in Bucharest and book an accommodation of your choice.

94.34% of people prefer to travel by car while visiting Herastrau Park