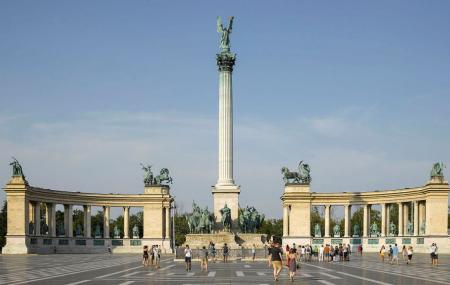 Hosok Tere or Heroes’ square in Budapest is a beautiful monument that attracts a lot of tourists in Budapest. The square commemorates the arrival of the first people who formed the nation of Hungary to the capital. In this sense, it is the most powerful symbol of Hungary in itself.  Since it was built to commemorate 1000 years of the settlement of people in Hungary it is also called the Millennium monument. This square right next to City Park has become quite iconic.

There are two arches with Corinthian columns and a 38 meters tall column in the centre. The arches or rather colonnades are adorned with bronze statues of the Nation’s heroes. Each personality depicted here has made a significant contribution to the history of Hungary. Moreover, there is tremendous symbolism in all the statues. The statue of the arch angel Gabriel stands on top of the central column.

This monument is extremely important to the country and hence a must visit. The Museum of Fine arts and the Palace of arts flank the square on either side making it all the more popular with tourists.

How to Reach Heroes Square

Love this? Explore the entire list of places to visit in Budapest before you plan your trip.

Fancy a good night's sleep after a tiring day? Check out where to stay in Budapest and book an accommodation of your choice.

92.19% of people prefer to travel by car while visiting Heroes Square