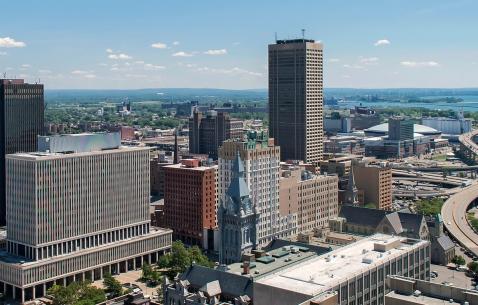 The first thought that comes to a person’s mind after saying Buffalo is chicken wings and in a way a number of long suffering sports teams. But, once you give it a chance you will learn that it is a lot more than just that. The beautiful snow clad mountains which are the best sight in winters, the historically rich museums and most importantly the people here that make the city so vibrant are the biggest highlights of Buffalo. Buffalo for one has also given the world a lot of talents that have just gotten lost in the anecdotes shared in the confines of this city. But once you do get here, you will be able to witness the talent in the form of long standing architectural gems. Case in point being the Frank Lloyd Wright's Fontana Boathouse or Darwin D Martin’s House or the replica of Statue of Liberty perched onto the terrace of Liberty Building.

Buffalo also has a love-hate relationship with American Politics. Theodore Roosevelt has taken his oath in Buffalo but Mc Kinley was killed here by an assassin from Detroit. Just as you are done with exploring the rich culture and heritage that this city has to offer to you, it will surprise you with its nightlife that is the perfect way to end every tiring day. Buffalo is the second largest city in the New York state and it will not really be wrong to say that it is in a way over shadowed by the neighboring popular regions. All in all, Buffalo also gives you a feeling that has a really enriching history but today is just confined to being one of the main industrial centers-even though it has all the potential to restore its former glory. Our advice is that if you are visiting main stream New York areas, you would easily be able to uncover the simple yet the wonderful city of Buffalo and all it would cost you is a ride!

Essential travel information and Buffalo tips for your visit