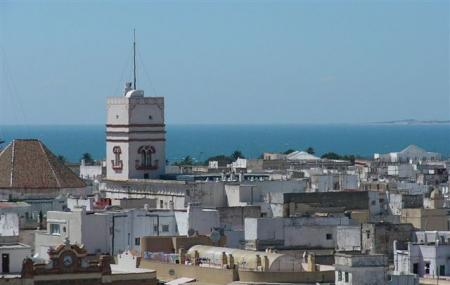 The Torre Tavira is a lookout tower in the city of Cadiz. It is situated in the centre of old town area and, at 45 metres above sea level, used to be the highest point in the city. The tower was the official watchtower in the 18th century. The Torre Tavira is divided into 5 major segments- the reception, the First Hall, the Second Hall, Camera Obscura ® and the Terrace. The reception includes the ticket counter, tourist information centre and the gift shop. The First Hall is an exhibition centre. On display are facts related to the Camera Obscura ®, mainly about its history and evolution. The Second Hall offers great panoramic views of the city. Along with this, the hall also displays the history of Cadiz, particularly of the 18th and 19th centuries. At the Camera Obscura ®, guided shows are conducted of the Camara Obscura, a marvellous equipment which projects an image on a white concave horizontal screen, in a completely darkened, black painted room. The terrace is the highest point of the tower. From here, one can see the whole city of Cadiz and the bay area. Trivia- the tower was named after its first watchman, D. Antonio Tavira.

How to Reach Torre Tavira

Love this? Explore the entire list of places to visit in Cadiz before you plan your trip.

Fancy a good night's sleep after a tiring day? Check out where to stay in Cadiz and book an accommodation of your choice.

53.47% of people prefer to travel by car while visiting Torre Tavira

People normally club together Park Genoves and Cadiz Cathedral while planning their visit to Torre Tavira.