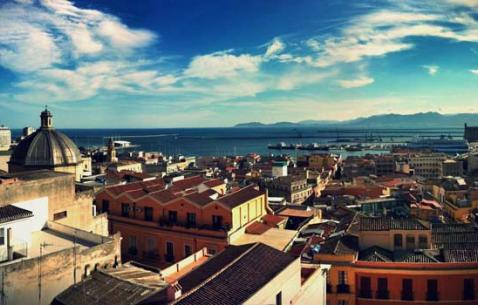 Cagliari (English /ˌkæliˈɑːri/, /ˈkæljəri/ or US /kælˈjɑːri/; Italian: [ˈkaʎʎari] ; Sardinian: Casteddu [kasˈteɖɖu]; Latin: Caralis) is an Italian municipality and the capital of the island of Sardinia, an autonomous region of Italy. Cagliari's Sardinian name Casteddu literally means castle. It has about 150,000 inhabitants, while its metropolitan city (including Cagliari and 16 other nearby municipalities) has more than 431,000 inhabitants. According to Eurostat, the population of the Functional urban area, the commuting zone of Cagliari, rises to 476,974.Cagliari is the 26th largest city in Italy and the largest city on the island of Sardinia. An ancient city with a long history, Cagliari has seen the rule of several civilisations. Under the buildings of the modern city there is a continuous stratification attesting to human settlement over the course of some five thousand years, from the Neolithic to today. Historical sites include the prehistoric Domus de Janas, very damaged by cave activity, a large Carthaginian era necropolis, a Roman era amphitheatre, a Byzantine basilica, three Pisan-era towers and a strong system of fortification that made the town the core of Spanish Habsburg imperial power in the western Mediterranean Sea. Its natural resources have always been its sheltered harbour, the often powerfully fortified hill of Castel di Castro, the modern Casteddu, the salt from its lagoons, and, from the hinterland, wheat from the Campidano plain and silver and other ores from the Iglesiente mines. Cagliari was the capital of the Kingdom of Sardinia from 1324 to 1848, when Turin became the formal capital of the kingdom (which in 1861 became the Kingdom of Italy). Today the city is a regional cultural, educational, political and artistic centre, known for its diverse Art Nouveau architecture and several monuments. It is also Sardinia's economic and industrial hub, having one of the biggest ports in the Mediterranean Sea, an international airport, and the 106th highest income level in Italy (among 8,092 comuni), comparable to that of several northern Italian cities. It is also the seat of the University of Cagliari, founded in 1607, and of the Primate Roman Catholic archdiocese of Sardinia, since the 5th century AD.

Cagliari is Sardinia’s capital island and also the greenest city of Italy. Tracing back to history, it was ruled by some civilizations. It also has the biggest ports and serves to be the industrial hub of Sardinia. It’s a beautiful city with historic buildings and places.

Plan Your Trip To Cagliari

The best tours and activities in the city, guided by experts to give you a local insight to the best of Cagliari