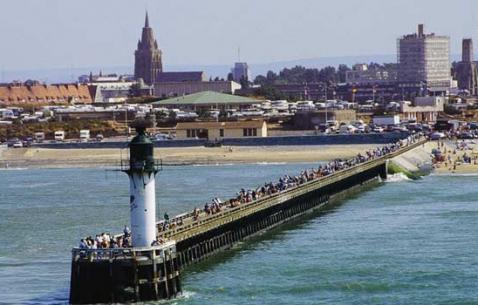 A major ferry town in the Northern France, Calais is said to be the linking factor of trade and tourism for both English and French territories. The city overlooks the Strait of Dover and is the closest French port town to England. With its rich culture, heritage and architecture, Calais attracts millions of passengers who cross the English Channel every year.

For many years in the medieval period, Calais was under the rule of England until it was annexed by the French in 1558. It was then known as the “brightest jewel on the English crown”. It was also a staging place for the Napoleon’s plan of invading England in 1805. The town was almost devastated during the World War II. And now, it has become one of the most important places for tourism in France with a number of tourist attractions.

The city is divided into two parts, the old town known as Calais-Nord is situated on a man-made island in the north, bordered by the canals and the harbours; and the modern one called as St. Pierre is towards the South.

The Calais itineraries involve so much to do, as there are a lot of sightseeing places, restaurants, bars and a vivacious culture. This is perhaps why Calais is one of the famous lunchtime destinations for the south-eastern British population.

Include this vibrant city in your travel planner for your next holidays, and while you’re here, don’t forget to do a lot of shopping, try their traditional French Gastronomy complemented with their low-priced wines and hit their clubs after sunset to experience their spunky nightlife.

Essential travel information and Calais tips for your visit