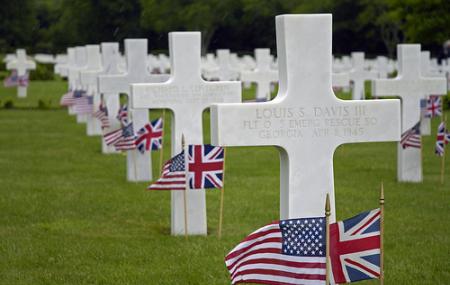 As you stand by the flagpole, Stars and Stripes ribboning out in the wind, the first thing that will strike you is the calmness in the air. The second thing that will grab your attention is the overwhelming number of graves that lay before your eyes. The Cambridge American Cemetery and Memorial, a tribute to the thousands of brave American soldiers that lost their lives on British soil, stands as a testament to the horrors of war and serves as a fitting final resting place for those who perished. Let serenity envelop you as walk past the meticulously maintained grass and survey the Cemetery’s fine architecture and beautiful landscaping.

The Cemetery and Memorial was opened in 1943 and was one out of three temporary American cemeteries in the country. It was the only one to become a permanent fixture on British territory. The men and women who rest here fought in the Battle of the Atlantic and the bombing campaign over Europe while some departed during training exercises. The Memorial’s wall is emblazoned with the name of each identified soldier who rests here, as well as over 5000 other people whose bodies were never recovered, including airmen and sailors.

The cemetery combines art, landscaping and symbolism in order to create an apt tribute to these fallen angels.Its 3,809 headstones are perfectly aligned upon the grass, in neat curving rows, at the head of fan shaped burial plots. Three clear, still pools create a tranquil environment and border the ‘Wall of Missing’. The Memorial Chapel, a 85 feet long, 30 feet wide and 28 feet high structure, contains a beautiful mosaic ceiling and windows meant to depict every American state. Finally, there’s a Visitor’s Centre, which conveys the history behind the cemetery and its residents. Visit this cemetery and pay your respects, the silence is soothing and a refreshing change from the noisiness of the city. Also, visit the popular attractions in the city by following Cambridge itinerary 1 day.

How to Reach Cambridge American Cemetery And Memorial

Love this? Explore the entire list of places to visit in Cambridge before you plan your trip.

Fancy a good night's sleep after a tiring day? Check out where to stay in Cambridge and book an accommodation of your choice.

People normally club together King's College Chapel and Duxford Chapel while planning their visit to Cambridge American Cemetery And Memorial.