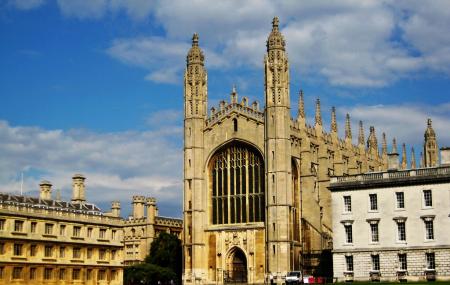 Like a radiant pearl sitting upon a cushion of green, the King’s College Chapel stands out in all its glorious yet stark beauty. Step through its enchanting gates and prepare to take in a collection of soothing sights and sounds. With architecture that dates back to the time of Tudor England and surroundings that include one of the most famous educational institutions in the world, it’s no surprise that art and history lovers from the world over are drawn to it. Its intricately designed walls and ceilings coupled with an angelic choir have made this chapel a symbol of Cambridge.

Its construction started in 1446, during Henry VI rule, and it took over a century to complete. Its stunning late Gothic architecture is credited to John Wastell and Reginald Ely and is one of the finest designs to come out of the Perpendicular period.This chapel isn’t just a pretty building, it comes with an interesting history as well! It survived the War of the Roses during its construction days, the Civil War during which Oliver Cromwell used it as a training ground for his troops, and the Second World War.

As you venture through the narrow lanes that wind around the area, you’ll see college after college, student after student and then finally, the grand chapel itself, surrounded by a lovely garden. Though not heavily decorated, its beauty will strike you thanks to its size and craftsmanship. Upon entering, look up and see its breath taking fan vault which is said to be the largest in the world. As your eyes trail southwards, you’ll marvel at its enormous stained-glass windows which positively glow as sunlight streams in. Above the altar, you will see one of Ruben’s works of art, titled ‘The Adoration of the Magi’. If you visit during college term, you’ll be treated to the college choir and accompanists, singing Even song. Also, visit the popular attractions in the city by following Cambridge itinerary 1 day.

How to Reach King's College Chapel

Love this? Explore the entire list of places to visit in Cambridge before you plan your trip.

Fancy a good night's sleep after a tiring day? Check out where to stay in Cambridge and book an accommodation of your choice.

86.63% of people prefer to travel by car while visiting King's College Chapel