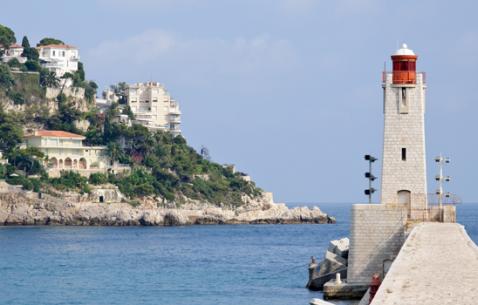 Cannes wasn’t always a hub of glamorous people, luxury shopping, cruises and cinema. All that happened in the second half of the 20th century. Before that it was mainly a fishing village with a beautiful harbour, a busy port and two mysterious, monk ruled islands out to the sea. These monks ruled Cannes for a long time. Its known an incredible amount of conflict in its history; the bloody battle of Othos and Vitellus in 69 AD, brutal Saracen attacks on the Lerins Islands in 891, and Spanish-British-French clashes in the 18th century.

With the advent of railways in the 19th century, and the establishments of projects like the Boulevard Carnot, the rue d'Antibes and the Carlton Hotel on the Promenade de la Croisette, the town quickly came to be known as a luxury winter retreat. The first film festival was only held after WWII. Now it’s one of the top tourist destinations in the world, a unique blend of intimate local ownership around Le Suquet, morbid history on the islands, and the glitz of celebrities everywhere else.

The city of Cannes has come a long way since its fishing village days. Now it’s the prime destination for the world’s rich and famous for its gleaming yachts, beautiful bodies, luxury shopping and of course, the film festival. But Cannes’ real charm lies elsewhere – on the mystic Lerin Islands, on the food-scent laden Rue d’Antibes and the old world atmosphere of Le Suquet. Move away from the glitzy promenade, and you’ll find the true heart of Cannes.

Essential travel information and Cannes tips for your visit

Plan Your Trip To Cannes

The best tours and activities in the city, guided by experts to give you a local insight to the best of Cannes