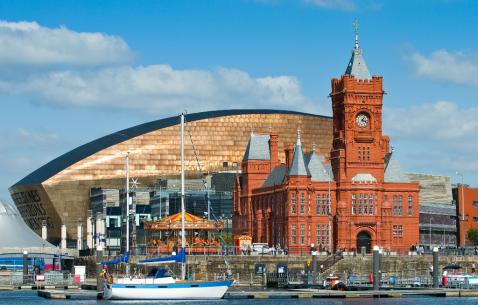 “And above all, watch with glittering eyes the whole world around you because the greatest secrets are always hidden in the most unlikely places.” said Roald Dahl, most likely with his home city in mind. With fields of luscious green, crystal clear water and a menagerie of stories and secrets, Cardiff tours are incomparable. Once known mainly as a market city, it has transformed into a travelers dream with all kinds of beautiful castles, gardens and exhibitions to take in. It’s also a great place to immerse yourself in Welsh history and culture, with local handicrafts and cuisine being as widely available as top commercial brand names.

Come visit Cardiff, the ‘City of Castles’, home of Doctor Who and one of the world’s greatest ports and enjoy your time by the sea. Feast on local delicacies while the bustling city transitions before your eyes from dawn to dusk before your eyes.

The Romans created a fort on the River Taff and this fort grew into the great Cardiff Castle that stands today and the area has been inhabited since then. In the 15th century, the town was destroyed, thus hampering its growth until the industrial revolution, which was the turning point in the city’s history. The Marquess’s of Bute were responsible for much of the city’s development, with different members of the family contributing in different areas. The second Marquess built a canal which facilitated exporting coal from Welsh’s valleys to the rest of the world. The third Marquess was known for his architectural patronage, leaving behind the stunning Cardiff Castle and the equally lovely Castel Coch.  In 1901, Cardiff was the third largest port in the British Empire, resulting in it finally being granted city status and it became the capital of Wales in 1955.

Cardiff is currently the country’s largest city, and the 9th largest in the U.K. It’s the city’s top most commercial centre, thanks to its export – not to mention Cardiff’s fame a tourism hotspot. With more and more people becoming aware of their Welsh heritage, interest in visiting the country has gone up. Cardiff travel, with its central location, efficient local transportation system, natural beauty and a host of promenades, shopping complexes and multi-cuisine restaurants, is the perfect destination for those who wish to explore Wales.

Most of the country’s national sporting and cultural institutions have made their home here such as the Cardiff International Sports Village and the BBC Drama Village. The Millennium Centre hosts top class sporting events and concerts, which get broadcasted internationally. It’s also the seat of the National Assembly of Wales and a host of other politically important buildings. Cardiff is also home to numerous natural conservation areas, making its parks important sites for Wales’ natural flora and fauna. On top of all this, this is where the TV phenomenon ‘Doctor Who’ is filmed, along with numerous other television shows and movies.

The city has something for everyone, from enormous green parks filled with natural wonders to man-made seaside promenades with all the latest brands.

Essential travel information and Cardiff tips for your visit

The best tours and activities in the city, guided by experts to give you a local insight to the best of Cardiff