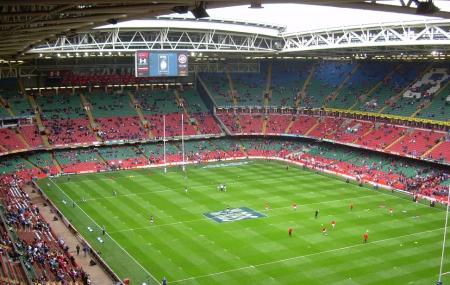 Situated upon River Taft is the enormous and magnificent Millennium Stadium. With a capacity of up to 70,000 people and a sliding roof to boot, this arena has played host to innumerable legendary football matches, concerts and has become synonymous with rugby. Whether you’re here to watch an event, reminisce about the past or just take a guided tour, you won’t be disappointed.

The Stadium was built as a replacement for The Arms Park in 1999. Since its inception, numerous events have taken place that cemented this stadium in the hearts and minds of the Welsh. The massively popular Rugby World Cup inaugurated these beautifully maintained grounds, and it was here where Wales beat South Africa for the first time in 12 matches during the 1999 Rugby Union matches. History was made in 2007, when one of the biggest nights in boxing attracted 50,000 people to the arena to witness the night when Joe Calzaghe was emerged the Best Boxer in the World in the middleweight category. The prestigious FA Cup Finals enthralled the fans to bits within these walls from 2001-2006. Besides a huge array of legendary sporting nights, the arena has hosted concerts features world famous artists such as The Rolling Stones and Madonna. The Stadium’s even appeared in certain episodes of Doctor Who!

How to Reach Millennium Stadium

Love this? Explore the entire list of places to visit in Cardiff before you plan your trip.

Fancy a good night's sleep after a tiring day? Check out where to stay in Cardiff and book an accommodation of your choice.

93.68% of people prefer to travel by car while visiting Millennium Stadium

People normally club together Cardiff Castle and Bute Park while planning their visit to Millennium Stadium.