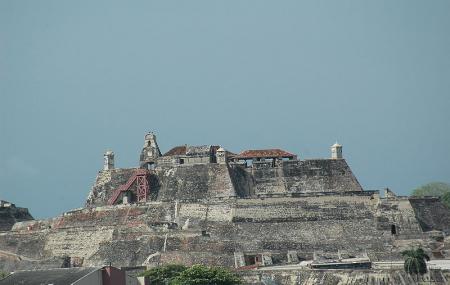 First constructed in 1536, then expanded in 1657, this triangular fortress atop a hill was named after King Philip IV of Spain. Cartagena Governor Don Francisco de Murga had it constructed to prevent enemies from attacking from behind the city. In the 1741 Battle of Cartagena de Indias, it held off British Admiral Vernon’s invading forces of 23,000 men and nearly 200 hundred ships! It also played an important role during the Spanish-American war of independence.

The fortress is grand and intimidating to look at. Rising 41 meters into the sky, with batteries and parapets that reinforce each other's defences, and with a maze of tunnels inside, it has never been taken. For the best experience, make sure to rent the audio guide from the ticket office.

Right outside the castle entrance is a pretty looking square. Rising in the middle you’ll find a monument statue of Spanish admiral Blas de Lezo y Olavarrieta. Lame, one-armed, and one-eyed, he fought in the the Battle of Cartagena de Indias, and is thought to have been one of the finest strategists in the Royal Spanish Navy.

Love this? Explore the entire list of places to visit in Cartagena before you plan your trip.

Fancy a good night's sleep after a tiring day? Check out where to stay in Cartagena and book an accommodation of your choice.