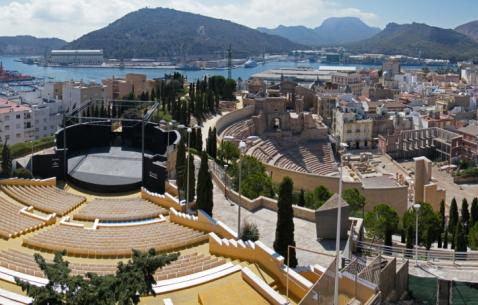 Overlooking the Mediterranean Sea and one of Spain’s most historically fascinating places, Cartagena, Murcia is a naval station and port city situated in Spain. Due to its strategic location, Cartagena has been inhabited by several cultures since the 227 BC. Having been a prominent port town during the Roman and Arabic empires, Ferdinand III ‘the Saint’ conquered it and incorporated it into the kingdom of Castile. The city has pretty much remained the same since then. All the civilizations and cultures that ruled the coastal city have left their mark on its artistic heritage.

A charming and compact coastal city, one of the things to do in Cartagena is visit the Roman Theatre. The ancient ruins will leave you mesmerized. Layers upon layers of history and culture can be found within the city. And yet, it has accepted the modern contemporary lifestyle with ease and panache. Archaeological finds and extractions blend perfectly with Art Nouveau architecture.

One of the must visit destinations in Spain, a tour of the place and its museums will show you its history and the beautiful way in which it is closely tied to the sea. Do include Cartagena in your Spain tour itinerary.

Essential travel information and Cartagena tips for your visit