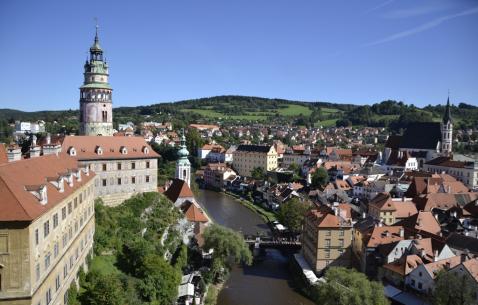 CeskyKrumlov is a UNESCO World Heritage Site, with one of the best-preservedhistorical centers in Europe. It’s often been called the perfect Fairy Tale city. Established in the 13th century, the town was first a German settlement, with a Czech minority, ruled by the House of Rosenberg. This communal disparity was heightened with the influx of German miners after gold was found here in the 16th century. The town changed hands from Emperor Rudolf II to Emperor Ferdinand IIto the House of Eggenberg and most recently to the House of Schwarzenberg. During these transitions it evolved from a Gothic to Renaissance to Baroque Town. From the beginning of WWI to the end of WWII, the town changed national allegiance multiple times until the Germans were finally expelled, and it became an entirely Czech town. Communist rule hit the town hard, but the non-violent Velvet Revolution restored the town to its former pristine beauty. Today, the town is revered for its incredibly rich and detailed historical monuments, the megalithic castle (which very unusually large for a town this small), and largely lush countryside.

Essential travel information and Cesky Krumlov tips for your visit

Plan Your Trip To cesky krumlov

The best tours and activities in the city, guided by experts to give you a local insight to the best of Cesky Krumlov