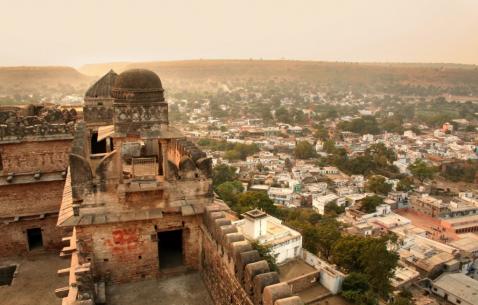 Famous for the Chanderi Sarees that are produced here since the Mughal period, Chanderi is a small town with a big story. The place find it roots in the Jain Culture and the Shri Choubeesee Bara Mandir, Shri Khandargiri Jain temple and Shri Chandraprabha Digambar Jain temple are the most unique places you will see when here.The story of the famous Battle of Chanderi in which the Mughal Emperor Babur captured the city from Medini Rai, still echoes in the Chanderi Fort.

The mystique of Chanderi lies in its Mythology and you can even find its name in the Hindu Mythology book ‘Mahabharata’ that tells the story of the world’s biggest war between 2 Royal families. Today, Chanderi’s historic secrets shine proudly in its museums that keep a part of Madhya Pradesh alive and breathing. The forts, the places of worshipthat are frozen in time and welcome anyone who wants to witness its intense stories, weave a magic that is hard to find anywhere else. The religious pulse of the city is hard to ignore and a visit to the many temples that grace the humbletown, gives you a peek into the deep belief and faith of the people.

Visit Chanderi, and you will find that spirituality has many colors and forms and even though it is a popular Jain Pilgrim center, its tourismflourishes owing to the historic architecture, simply living and rural charm. The historic monuments mainly consist of Palaces and Temples that add to the ethereal glow of not just Chanderi but the state of Madhya Pradesh as well. Add to that the sheer beauty of the ethnic handlooms and you have a unique shopping experience as well.

To explore the city best, try to cover the city on foot as you absorb its minimalistic yet enchanting buildings, warm people ambience and re-live the tales of the years gone by.

Essential travel information and Chanderi tips for your visit