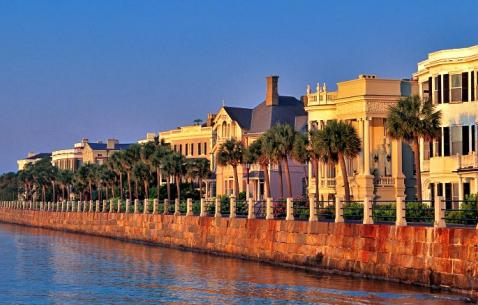 This is a seaport city on the banks of two rivers, Ashley and Cooper. The city was captured during the Civil War and so has been greatly influenced by the Colonial Era settlements. There are many old buildings and structures here but no skyscrapers – the government restricts building heights.

The city was in earlier times known as Charles Towne and was founded in the year 1670 by Anthony Ashley Cooper. It was at first the settlement of native North Americans but later captured by British Colonials, who built a fortifying wall to escape from attacks. Fortunately, the Civil War did no lasting harm to the city’s charm and beauty. Tourists attractions here focus a lot on this.

Sightseeing-wise, you will find a variety of architectural styles such as Gothic, Roman, Greek, Victorian, Italian, Georgian, Adam, etc. There are thriving communities here of Jews and French Hueguenots – plan for a lot of walking in your Charleston vacation itinerary.

It is known that the people are very peace loving here and live a very classic lifestyle. They are very helpful and polite with everyone. The accent is known to be quite sharp and also has a tinge of English style. Apart from that you will also here many regional tongues here because of the various communities that have settled here.

Essential travel information and Charleston tips for your visit

Plan Your Trip To Charleston

The best tours and activities in the city, guided by experts to give you a local insight to the best of Charleston