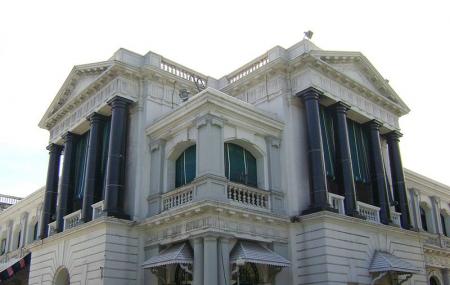 The catalyst to the creation of what is now Chennai, Fort St. George has a great amount of historical significance attached to it. Though it’s currently more of a center of administrative activities, it is home to India’s oldest Anglican Church, tallest flag staff and a number of beautiful and unique paintings. The Fort is a good place to visit for those interested in a bit of history and would enjoy a glimpse of architecture of an older era.

The forts creation led to settlements and economic activities amongst traders on what was then uninhabited land. The British East Indian Company bought this land and built a harbor as well as the fort. Construction work was completed on the 23rd of April, 1664, which coincided with St. George’s Day thus resulting in the fort’s given name. As it faced the sea and some fishing villages, it soon became the center of merchant activity. Soon, it helped the British establish influence over the Carnatic region and keep the French forces present in Pondicherry at bay.

The Fort is divided into three main areas - the Museum, the Church and Wellesley House. The museum, which was then the Madras Bank, now exhibits articles of Colonial India such as weapons, medals, uniforms, handwritten letters and other fascinating artifacts. The museum also displays a 14.5 feet statue of Lord Cornwallis with Tipu Sultan, his two sons and the East India Company officials.

The Church, known as the Westminster Abbey of the East, is the oldest Anglican Church in India. It is also home to the oldest British tombstones in the country! The first marriage recorded in the church is the famous Yale University’s namesake, Elihu Yale. Wellesley House, named after the former Governor General of Colonial India and was formerly a banquet hall, has walls adorned with paintings of high officials of the regime. These paintings are very beautiful and many visitors to the fort mention these portraits as the highlight of their experience.

Today the Fort works as housing for Tamil Nadu Government's administrative branches and legislative assembly as well military compound for soldiers in transit. A visitor once described the Fort as ‘a curious combination of business and tourism’. A little difficult to reach on foot, taking an auto rickshaw is recommended. One can spend around an hour strolling around the Fort and taking in its rustic physical beauty and then make their way down to Marina Beach or other famous attractions that are around the same area.

How to Reach Fort St George