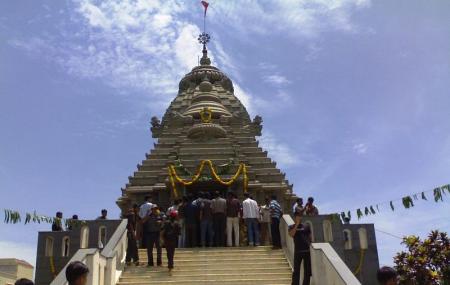 One of the cleanest and most well maintained temple in South India, the Jagannath Temple in Kanathur is a shrine built in honour of the Hindu divine trinity, Jagannath, Balabhadra and Subhadra. These divine siblings are also knows as Krishna, Balarama and Parvati. The temple is also home to shrines dedicated to Shiva, Ganesh and Bimala. The main festival celebrated here is the annual Rathyatra. The temple is located in Reddy Kuppam road, a kilometer away from the main ECR road.

The temple is very similar in appearance to another famous temple, the Puri Jagannath temple is Orissa. The idols have been built in Neem wood and the shrine itself is built in glistening, black granite and glowing white marble, from Kancheepuram and Orissa. The temple walls are adorned with Pata Chitra paintings, some depicting the many incarnations of Vishnu. Lush green lawns and combined with scintillating sea smells, thanks to a nearby beach, surround the temple, making it picturesque and soothing.

The flowers grown in the garden are used for the pujas, which are conducted in Oriya style by the priests, who are also from Orissa. There are numerous sanctums at the shrine, which include those of Shiva, Ganesha, Devi Vimala and one meant for the nine planets. The ‘rathyatra’ is the most important festival, worth a visit for tourists and pilgrims alike. The primary deities are taken around the Kannathur village during the occasion.

You can reach the temple by bike, car or bus and is usually uncrowded, especially in the morning. The beautiful and serene environment generates a pure, calm vibe around the area. Tourists can visit the Anand Bazar, where ‘Abadha’, famous temple Prasad, is prepared. It’s advisable to order in advance as they only make food based on pre orders, to avoid wastage. Ideal visiting times are 6:30am to 7:30am and it is close in proximity to the ISKCON temple. Not many people are aware of this temple, making it a gem in the bustling, busy, crowded city of Chennai.

How to Reach Jagannath Temple Kanathur