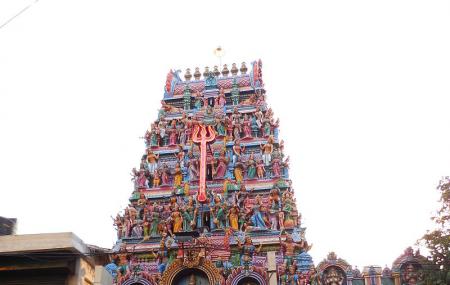 The Kalikambal Temple is a temple dedicated to not just one, but two lords. It is here that the idols of Shri Kaligambal (Kamakshi) and Lord Kamadeswarar are worshipped. With an already picturesque location at the Parry's corner in Old: George Town, this temple with its characteristic Dravidian architecture is breath-taking to say the least.

As per history, the temple had a different location earlier, much closer to the seashore than what it is today. It is in the 16th century that it was relocated to its current location on the street parallel to a prominent financial street called the Thambu Chetty Street. Even the great Maratha warrior, Chatrapati Shivaji Maharaj has worshipped this temple back in the 17th century.

As per legends, there was fierce goddess who was worshipped here, who was later replaced by the Goddess Kamakshi in the form of shanta swaroopa or the calm posture. Also, visit the popular attractions in the city by following Chennai itinerary 1 day.

How to Reach Kalikambal Temple

83.33% of people prefer to travel by car while visiting Kalikambal Temple

People also prefer to end their day with Kalikambal Temple.