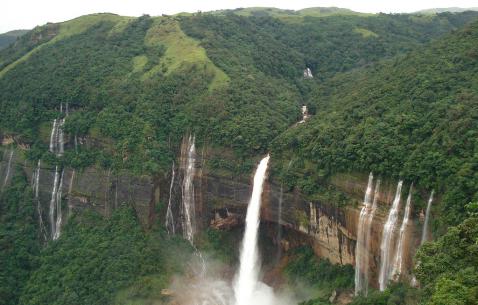 Cherrapunji features prominently in the southern fringes of Khasi Hills that are always enveloped by the rolling clouds. This little town is also called as Sohra and comes across as one of the most significant tourist destination in Meghalaya. The name Meghalaya literally means “Abode of the Clouds” and as the name suggests it is one of the wettest places on the earth that receives the highest rainfall in the world with Cherrapunji holding Guinness book of World record as the wettest place on earth. This status of Cherrapunji has however changed due to the Global warming and heavy deforestation. Today it has thus slipped to the second place with close by Mawsynram holding the record for highest rainfall.As for the beauty of this immaculate town- it is surrounded with verdant pine forested hills, pretty white streamlets, cascading waterfalls, and its tranquil temperate climate that is always shrouded with the army of clouds. Due to its climate, this town is sometimes compared to Scotland.As for its history, David Scott, the political agent of the East India Company arrived at Cherrapunji in the early 19th Century via Syhlet district of erstwhile East Bengal. Under Scott, Cherrapunji came to be known as the ‘Cherra Station’ and he made it the official headquarters of the Khasi and Jaintia Hills. Subsequently it also served as the capital of Assam before the British moved the capital to Shillong. Later on Sohra saw immense change after the Welsh Mission arrived here. A typical itinerary of Cherrapunji will include a visit to its spectacular waterfalls, deep valleys and evergreen misty landscapes. The town also boasts of having a few fascinating stone gorges noted among which are Riat-Maw-Iew, Maw-Laikhlieh and Riat-U-Shain. The heavy monsoon rains over these mountains undoubtedly creates in Sohra(Cherrapinji) one of the rarest bio-diverse vegetations in the world. Explore nature in its virgin self with Cherrapunji.

Essential travel information and Cherrapunji tips for your visit