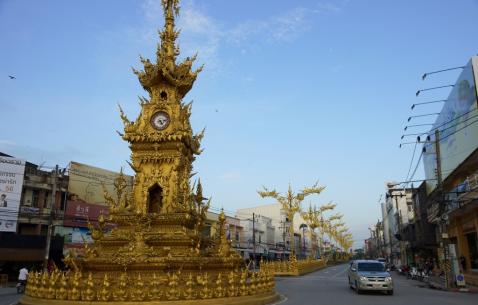 Chiang Rai is a city located in the Chiang Rai province of Northern Thailand. With an abundance of natural attractions and exotic wildlife, Chiang Rai finds a place on many vacation planners. It is also a major commercial hub close to the Golden Triangle of Burma, Laos and Thailand.

The earliest settlements in Chiang Rai date back to the seventh century. However, it gained significance when King Mangrai established it as the capital of Lanna Kingdom in 1262 CE. The region remained under the rule of Burmese for several centuries until it became a vassal of Chiang Mai in 1786. It was annexed into Thailand (Then Siam) in 1899 and was announced as a province in the year 1933.

Endowed with blissful natural sceneries and ancient tourist attractions, Chiang Rai is no less than a paradise for travellers. The city’s itineraries include trips to the picturesque mountain ranges and the charming villages of hill tribes, most of which still retain the traditional Thai culture.

This laidback town is known for several trekking facilities and hiking trails that run down to the tribal countryside. It is also famous for its Night Bazaar at Saturday Night Walking Street held at the downtown where a lot of souvenirs, local crafts and food are displayed and sold.

Though Chiang Rai was off the tourist radar for years, it gradually became a popular escapade for travellers. The concentration on tourism increased considerably over the last few years, and the attractions were developed in such a way that its natural and cultural appeal remained intact.

Essential travel information and Chiang Rai tips for your visit

Plan Your Trip To chiang rai

The best tours and activities in the city, guided by experts to give you a local insight to the best of Chiang Rai