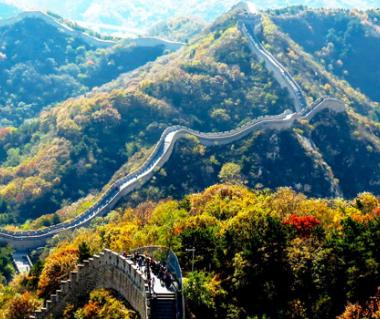 Plan Your Trip To China

Places to visit in China

China is a giant in many ways. Its enormous size, huge population, political power and tremendous potential certainly make China a force to be reckoned with. But its picturesque beauty, its long history, rich culture and a sense of majesty that the country has make it an absolutely fantastic tourist destination.

China or the People’s Republic of China is a land so rich in so many ways that it has become a very popular place for travelers to explore. The rich and interesting culture, poetry and religion are a matter of great fascination for the entire world.

The Oriental architecture of china is both exquisite as well as strong. This finds undeniable proof in The Great Wall of China; the expansive and beautiful stone structure that passes through this stunning country. It is not just the pride of China. It is one of the most iconic constructions in the world. This amazing feat of architecture achieved in the ancient times is impossible to ever replicate. Seeing it is a once in a life time experience like no other. Besides this, the country is full of alluring temples and pagodas that are a feast for the eyes while the philosophy behind them is food for thought.

China is an extremely large mass of land and with great size there is great variety. The 96,600,000 square kilometers of land are home to a variety of animals, birds and plants. It is one of the 17 mega-diverse countries in the world. From the beautiful forests in the middle of the country to the pristine coasts of the yellow sea, the country is equally attractive throughout the massive stretch.

Most importantly China has progressed a lot in terms of economy. The place has become ultra-modern while still preserving its essence. This beautiful amalgamation of the old and the new is certainly worth seeing.

For all these reasons and many more China is slowly becoming a tourist paradise. A trip to the country is sure to be varied and vast; certainly a thought provoking and life changing experience. This Eastern Beauty beckons you! Are you ready to experience its splendor?

When to visit China?

China, due to its huge expanse is the kind of country you can visit throughout the year. It entirely depends on the purpose of your visit. If you want to see snow or try some ice sports the north is your best bet and the south has beautiful sultry beaches in summer. Everything in between is as varied if not more. The weather in general is on the cooler side so you can decide your favorite time according to your purpose.

How to reach and how to get around?

There is a lot to see in China. The vastness of the country makes this quite obvious. No matter where you intend to go try to explore the unexplored here.

Shanghai: Shanghai on the Yangtze River is an extremely vibrant and beautiful city with a lot of character. You should visit it just for the atmosphere. The city’s energetic beating heart is apparent in the way people live and go about their lives. Culture and modernity are beautifully married here.

Beijing: Beijing is known for its significance to the history of China. The city has been the seat of Chinese politics since ancient times. Now the capital, it still holds relics from imperial China safely within its modernized grasp.

Guangzhou: Guangzhou is the capital and biggest city of the Guangdong territory in the People's Republic of China. This beautiful city has so much to offer. From museums, to temples to getaway places, Guangzhou has a lot to explore.

What to do and what not to do?