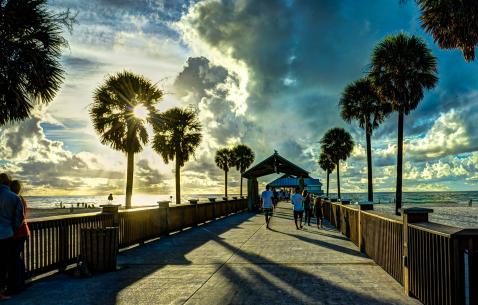 Clearwater is a fun beach destination. It can make for a romantic beach vacation as well as a fun weekend getaway with family and friends. It makes for the most thrilling of destinations, both on land and sea. The affability of the place lies in the fact that it offers something for each traveller and every destination. There’s casual dining, in terms of beach shacks and cafes, along with exquisite fine dine options as well. Located in Florida’s stunning west coast, this is a beautiful beach brimming with life and energy, studded with travellers and tourists of all kinds.

Clearwater was originally home to Tocobaga people. It mainly acted as the training base for the troops during World War II, which were later on sent to the Pacific. Clearwater was incorporated as a city in the year 1915, and saw its first news daily get published in the year 1914 called the Clearwater Daily.

Presently it is seeing the inception of several high rise condos and marinas. The weather in the place is known to be outstanding and temperate cool. Ranked amongst America’s most beautiful beaches, it has crystal like clear white sugar beaches, clear waters and the most engulfing and pleasing of weather.

Apart from being a popular tourist destination, it is also rich in cultural diversity. It is home to a host of galleries and museums. Clearwater can be a quite getaway as well as a fun-filled joyride. Known to have cloudless clear blue skies, with fleecy white clouds to complement the clear blues below, clearwater is the perfect weekend getaway for anyone touring Florida or nearby places.

Essential travel information and Clearwater tips for your visit

Plan Your Trip To Clearwater

The best tours and activities in the city, guided by experts to give you a local insight to the best of Clearwater