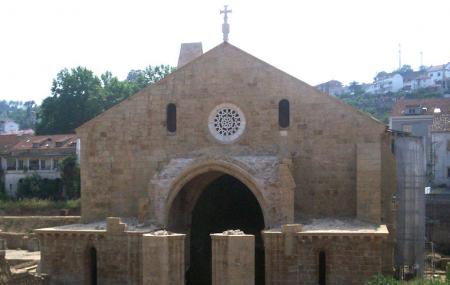 Near the Mondego River, the ruins of this old 13th century monastery, which was abandoned over 300 years ago due to constant flooding, were excavated in the late 20th century. It was founded by Mor Dias, a member of the Order of the Poor Clares, and then had to be refounded by Queen Elizabeth of Portugal in 1314. However, constant annual flooding made it impossible for nuns to manage their life there. The royal tombs were removed from the monastery in 1677. After the mud and water was removed in recent years and a tourist center was added, interest in the ruins has increased.

Much of the attraction’s design seems to be influenced by the Monastery of Alcobaça: pointed barrel vault in the nave; groin vault in the side aisles; and columns of the nave. Also see the South portal which connects to the church to the cloisters. The works of art that used to be at the monastery can now be seen in the Machado de Castro Museum.

Definitely check out the interpretive center, exhibition rooms, and cafe. It also houses some objects recovered from the ruins

How to Reach Monastery Of Santa Clara-a-velha

Love this? Explore the entire list of places to visit in Coimbra before you plan your trip.

Fancy a good night's sleep after a tiring day? Check out where to stay in Coimbra and book an accommodation of your choice.