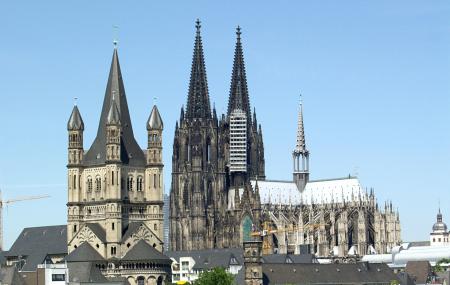 A UNESCO World Heritage Site, Cologne’s most significant and historic landmark, the Kolner Dom is one sight you do not want to miss. The Kolner Dom, the largest Gothic cathedral in all of Germany, is said to be a physical manifestation of what God’s kingdom on Earth would look like. Standing proud at 515 feet above the ground, the Kolner Dom was briefly the tallest structure of the world, before the Washington Monument.

The south tower, comprising of some 500 steps, offers some stunning vistas of the city. There’s a breather waiting for you halfway through the 500 steps in the form of the world’s largest free ringing working bell, the 24-tonne Peter Bell. The Kolner Dom, whose construction began in 1248 and was completed in 1880, is said to house the treasures of the three Kings whilst on their way to see Jesus.

The best part of the Dom is that it looks different from all sides. To truly appreciate the architectural wonder it is, circle the cathedral. The inside is just as awe-inspiring as the outside. Look for the Shrine of the Three Kings behind the cathedral’s main altar, where the remains of the three kings are said to be, embodied in bejeweled sarcophaguses. The treasure trove of the cathedral is endless, so take your time here.

How to Reach Kolner Dom

Love this? Explore the entire list of places to visit in Cologne before you plan your trip.

Fancy a good night's sleep after a tiring day? Check out where to stay in Cologne and book an accommodation of your choice.

59.46% of people prefer to travel by car while visiting Kolner Dom

People normally club together Roman-Germanic Museum and Museum Ludwig while planning their visit to Kolner Dom.