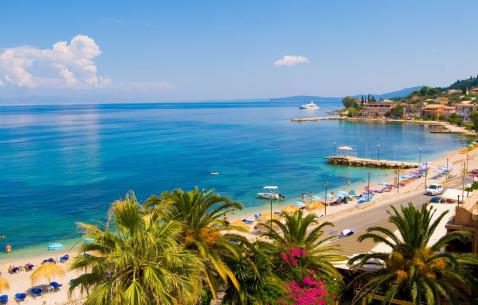 Corfu is one of the Ionian Islands in Greece. Pristine blue waters, heavenly beaches and a rich history make it one of the best places to visit all year round. Perhaps this was the reason that kingdoms around the globe wanted Corfu as their place of reign- be it British, French or Venetians.

The whole town of Corfu is soaked in history. The venetians ruled the Island from medieval times to the 17th century following which the Britishrule prevailed. 18th century gave way to the French rule and in 1864, the three kingdoms signed a treaty which gave the rule of Corfu back to Greece. However, the city still breathes their influences in its palaces, castles, fortresses, narrow alleys and unpopulated city squares.

The World Wars destroyed the city’s beautiful historic places, including churches, homes and the Parliament. With a troubled past, the Island found stable grounds from 1950’s to 1990’s, when the city was resurrected using technology and education.

Inspite of being returned to Greece much later- Corfu has made notable contributions to its homeland including the first Philharmonic Orchestra, first Greek University and the first School of Fine arts.The culture in Corfu is free. You can move around the city without any hassles and scare-offs of safety.

Architecture and nature makes up most of the city’s sightseeing. Corfu in Greece is blessed withtourismwhich thrives on its Italian, Roman, classic Greek, British and French influences. Today the city attracts tourists for the sheer variety of attractions from medieval times to the 20th century.The pleasant weather all year round makes the Island of Corfu an ideal addition to your travel itinerary.

Essential travel information and Corfu tips for your visit

Plan Your Trip To Corfu

The best tours and activities in the city, guided by experts to give you a local insight to the best of Corfu