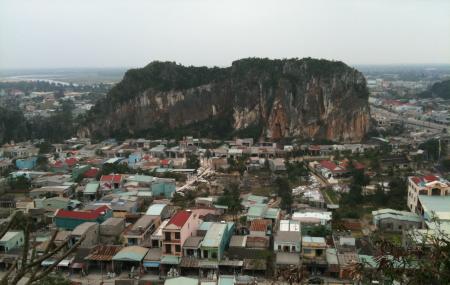 Find hotel near The Marble Mountains

The incredible Marble Mountains can be a little confusing to get around to, so keep in mind they are a cluster of 5 marble and limestone formations within driving distance, or even walking, if you've got the time. The legend goes, a dragon came out of the water, laid an egg that hatched a beautiful girl, and the shells of the egg became the mountains. Each mountain represents an element: :Thuy Son (Water), Moc Son (Wood), Hoa Son (Fire), Kim Son (Metal or Gold) and Tho Son (Earth). Each is spiritually significant, with Confucian and Buddhist shrines and pagodas (chua). The villagers in the area are all into marblework, but thankfully, not the marble of the mountain. Check out the quarries. The hawkers make a good place to buy souvenirs, most of which are trinkets carved from marble. More than a million tourists visit every year, so there will probably be a crowd. The Moc Son has no caves or pagodas.

The Thuy Son is the most beautiful and biggest of the five. There are two entrances to this mountain - a southwest entrance leading 156 steps up to 1630 Tam Thai Pagoda, and an eastern entrance 108 steps up to LinhUng Pagoda. Or you could pay a fee and take the elevator. The LinhUng, a shrine within a cave, is the most popular pagoda of the mountains. From the Tower XaLoi, you get spectacular vistas of the sea. In HuyenKhong cave is an immense stone altar. The steep descent at Am Phu cave gives it its name - Cave of Hell (check out the statues of skeletons, demons). Another view point to the west gives a great view of the city.

The mountain rises over the confluence of two rivers. The locals say they represent the balance of nature - yin and yang. You'll see some ruined towers here, remnants of the Champacivilisation. However, the main attraction is the Pho Da Son Pagoda, which contains artefacts from Emperor Minh Mang.

Said to be shaped like a bell, this mountain has the theQuan Am pagoda and Quan Am cave, in which the stalagmites and stalactites take on strange shapes and cast surreal shadows. The locals say these figures are reminiscent of the Buddha. If you're on the river below, you'll be able to see the temple reflected in the water.

This is the highest moutain. It can be climbed by steel ladders that start at the cave and come out on the top. The locals say the silhouette of the mountain resembles a sleeping dragon. Inside the mountain is a tunnel that the the Vietnamese used against the Americans, and the French before that. There's tall column of rocks 30 metres high representing the Buddha; next to it is the Long Hoa Pagoda.

How to Reach The Marble Mountains

Love this? Explore the entire list of places to visit in Da Nang before you plan your trip.

Fancy a good night's sleep after a tiring day? Check out where to stay in Da Nang and book an accommodation of your choice.

93.56% of people prefer to travel by car while visiting The Marble Mountains

People normally club together Lady Buddha And Linh Ung Pagoda and Non Nuoc Beach while planning their visit to The Marble Mountains.

People also prefer to start their day with The Marble Mountains.