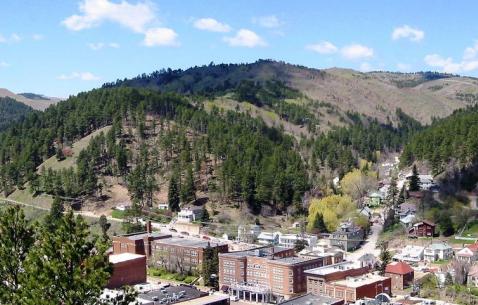 Deadwood is a city in South Dakota, United States. Although it is named after the dead trees found in its gulch (a V-shaped valley formed by erosion), don’t leave it out of your vacation planner just yet! The city isn’t as colourless as its name would have you believe! In fact, it’s quite the opposite!

The settlement of Deadwood started its history illegally in the 1870s. The land actually belonged to American Indians according to an 1868 treaty. However in 1874, Colonel George Armstrong Custer led an expedition into the Black Hills and announced the discovery of gold. This announcement and the greed that comes with the finding of gold created the lawless town of Deadwood. And as you can imagine, with greed came gamblers and prostitutes. And like the stories we’ve heard about the Old West, gun-slinging and murder was an everyday affair. The list of victims includes the famous lawman Will Bill Hickok who was shot in the back of the head in 1876 while gambling, who is now reverently remembered and celebrated by this city.

After the economy shifted its focus from gold panning to mining though, all the disreputable characters left town and it became very prosperous. Present day Deadwood lives off its former notoriety and has become a part of the vacation planner of the traveller who has grown up reading stories and watching movies about the infamous Wild West. It’s now a tourism-driven historic landmark with its gold rush-era buildings restored to their earlier glory, along with gunfight re-enactments, gambling, drinking and lots of entertainment.

If a lavish take on the history of the Wild West is what you’re in the mood for, there is no better place than the morbidly-named Deadwood and it should be a definitive part of your trip planner. Its historical charm will steal your heart and it will be one insightful and educational trip that you will remember for years.

Essential travel information and Deadwood tips for your visit