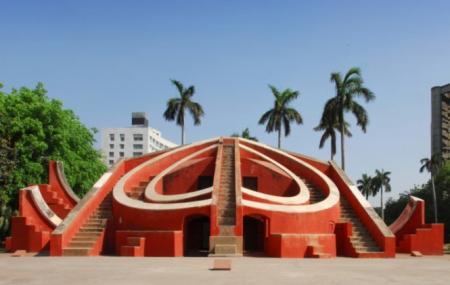 The Jantar Mantar is an interesting historical complex to visit which introduces us to the earlier forms of astronomical studies in India. There are 13star gazing instruments present at this place. Built during the reign of Maharaja Jai Singh II of Jaipur, from 1724 onwards, the monument is a reminder of ancient astronomy and engineering. There was some confusion and controversy about the exact period when the Jantar Mantar was built but it was resolved by historians recently.

The rajah had set up 5 such observatories all over India. The role of the observatory was to order cosmic tables, and to foresee the times and developments of the sun, moon and planets. Unfortunately, the observatory can no longer be used due to the tall buildings that surround it. This amazing structure is as rare as it is beautiful and there are plans to try and restore it to its original functioning self. It is an intriguing tourist site. Just image how people in the 1700s were capable of setting up such instruments and actually used them for navigation!

How to Reach Jantar Mantar

Love this? Explore the entire list of places to visit in Delhi before you plan your trip.

Fancy a good night's sleep after a tiring day? Check out where to stay in Delhi and book an accommodation of your choice.

94.32% of people prefer to travel by car while visiting Jantar Mantar

People normally club together India Gate And Rajpath and Gurudwara Bangla Sahib while planning their visit to Jantar Mantar.