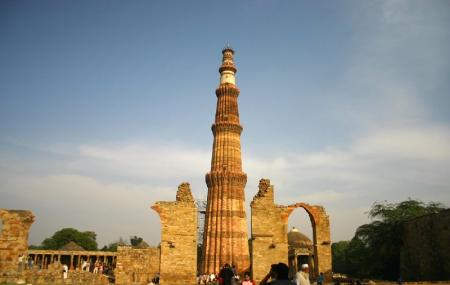 Towering above the cityscape of Delhi, Qutub Minar is a beautiful brown minaret which is also the tallest tower in India, belonging to Mughal reign. The construction of the Qutub Minar began during the rule of Qutub Ud Din Aibak and was subsequently added upon by rulers like Itutulmish later on. It is one of the first constructions made by the Mughals in India.

Due to the age of the monument it has had to be restored and some places around it are in ruins but it stands tall as a beacon of Mughal past in India. The beautiful minar with its many balconies and sandstone architecture is an icon of the Mughal culture in India. Inside the Qutub Minar Complex, there is a 7 m-high iron pillar. It is said that if you can encircle it with your hands while standing with your back to it your wish will be fulfilled.

There are several old buildings worth seeing in these premises. The Minar has been declared a UNESCO World Heritage site in 1993. However, the Public access to the tower (i.e. inside the tower) was banned due to an incident in 1981 but it is definitely worth visiting marvel at its architecture.

How to Reach Qutub Minar

Love this? Explore the entire list of places to visit in Delhi before you plan your trip.

Fancy a good night's sleep after a tiring day? Check out where to stay in Delhi and book an accommodation of your choice.

90.04% of people prefer to travel by car while visiting Qutub Minar

People normally club together Garden Of Five Senses and Lotus Temple while planning their visit to Qutub Minar.

People also prefer to start their day with Qutub Minar.