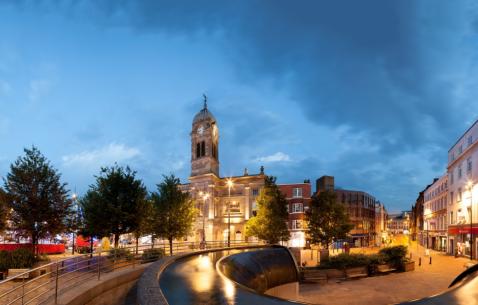 Derby (/ˈdɑːrbi/ DAR-bi) is a city in Derbyshire, England, on the banks of the River Derwent. In 2011, it had a population of 248,700. Derby was settled by Romans – who established the town of Derventio – Saxons and Vikings, who made Derby one of the Five Boroughs of the Danelaw. Initially a market town, Derby grew rapidly in the industrial era. Home to Lombe's Mill, an early British factory, Derby has a claim to be one of the birthplaces of the Industrial Revolution. With the arrival of the railways in the 19th century, the city became a centre of the British rail industry. Derby is an internationally renowned centre for advanced transport manufacturing, home to the world’s second largest aero-engine manufacturer, Rolls-Royce, and Derby Litchurch Lane Works, for many years the UK's only train manufacturer. Toyota Manufacturing UK's automobile headquarters is south west of the city at Burnaston. Wikipedia

Discover the beauty of the city's striking landscope, welcome to , . Most online packages to this city are of 1-2 days.