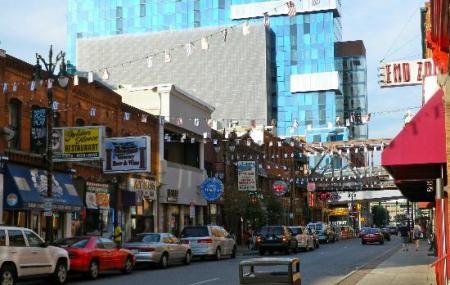 Greektown is the historical, landmark commercial and entertainment centre of the city of Detroit. Located north east of downtown Detroit, this site of the Greek Parade, is well connected by the Detroit People Mover.

To save the culturally significant neighbourhood, Detroit’s Greek leaders appealed to the Mayor’s office.

Greektown is a cultural melting point of Detroit, serving the most authentic Greek cuisine Detroit has to offer. The district is also home to one of the city’s largest, most well known casinos, The Greektown Casino.

Most of the buildings in this scenic little district are modelled to resemble older Greek structures like the Pathenon and the Pegasus, giving you the feeling of being transported to ancient Greece.

How to Reach Greektown

Love this? Explore the entire list of places to visit in Detroit before you plan your trip.

Fancy a good night's sleep after a tiring day? Check out where to stay in Detroit and book an accommodation of your choice.

90.12% of people prefer to travel by car while visiting Greektown

People normally club together The Henry Ford and Detroit International Riverfront while planning their visit to Greektown.