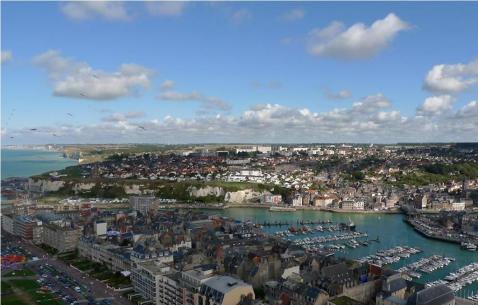 Dieppe is a beach town in Normandy, located on the Limestone Cliffs of the English Channel. With one of the busiest ports in the country, Dieppe can be seen as a place where you see fishermen unloading mounds of fish and scallops. The city is famous for its failed land operation by Canadian Allied forces in the World War II.

Traced back as a small fishing settlement in the 11th century, Dieppe was the most important reward for the Hundred Years’ War. It was invaded by Germans after the fall of France in the Second World War. The Dieppe raid, an operation by Canadian forces backfired when a number of their soldiers were captured or killed.

The closest beach city to Paris besides being an important fishing town, Dieppe focuses a part on trade and part tourism. Often covered with clouds, this town oozes charm on weekends while tourists flock the city to relax on the seaside resort.

The narrow lanes of the town with shops and cafes on the corners are always so welcoming that you cannot resist walking in. Dieppe is also known for its famous Saturday market in the Normandy area, which looks vibrant bustling with many sellers, buyers and loads of commodities. Almost everything is available at the market. So shopaholics, list out this place in your vacation planners.

Dieppe is also a great place for sport enthusiasts, as the city houses an 18-hole golf course nearby, and has excellent facilities for tennis and water sports. Talking about the art and culture, the chateau museum in the city houses a great collection of 16th century impressionist paintings.

On the whole, Dieppe would be a great place to visit if you want to have a laid-back vacation with some sightseeing, have some Cheese with Cidre Bouche and spend some lousy time strolling along the harbour.

Essential travel information and Dieppe tips for your visit