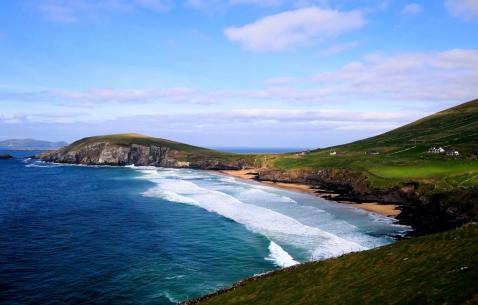 A cozy haven amidst pristine green mountains, Dingle is Ireland’s best kept secret. The only town in Dingle Peninsula in Ireland, the town is nestled on the Atlantic Coast.

For globetrotters, Dingle is the un-touched paradise which has stood still in time. The pristine islands with irregular cliffs are sure to keep you engaged while you cliff-walk along its pristine mountains. An important part of Irish history, Dingle served as a major port after the Norman Invasion. By mid 1200s, more goods were exported through Dingle Port than its neighbouring towns and cities and soon customs were laid for the port.

14th century marked Dingle on the global map as a wine exporter and by the 16th century the port was used to export fish and import wine from Europe. After signing the Treaty of Dingle in the 16th century, Dingle was significant as a pilgrimage spot for worshipping St. James. Before the Plague in 1849, Linen production sky rocketed Ireland’s economy. However, the trade stopped after the industrial cotton production peaked.

Today the 21st Century Dingle is nothing short of a tourism paradise. You are sure to find many favorite spots here which you would rather keep a secret for every time you visit Ireland. If you are travelling for a peaceful, tranquil experience and prefer nature over clubs in Ireland, Dingle is sure to give you an experience of a lifetime.

Essential travel information and Dingle tips for your visit

Plan Your Trip To Dingle

The best tours and activities in the city, guided by experts to give you a local insight to the best of Dingle