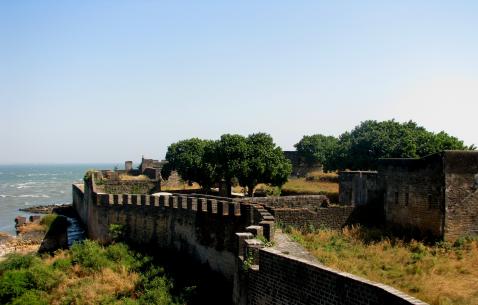 Diu has been settled since at least the 7th century, when Persians fleeing invasions of their homelands made landfall here. But the most significant event was probably the arrival of the Portuguese colonialists in the 16th century. Bahadur Shah, the Sultan of Gujarat, allied with the Europeans against Mughal emperor Humayun, leading to the creation of Diu Fort. When the Portuguese refused to leave, the Sultan went to war and was killed.

The rise of Bombay diminished Diu's importance, so it never really saw any other real conflict. Still it wasn't until 1961 that the Portuguese were ousted, in a simultaneous attack on all remaining colonial holdings under Operation Vijay.

Today, it's one of the 100 cities in the Smart Cities initiative under NarendraModi. Diu had a population of about 25000. It is a city of low skylines and old European architecture. It is also one of the few places in Gujarat where alcohol is legal.

Essential travel information and Diu tips for your visit