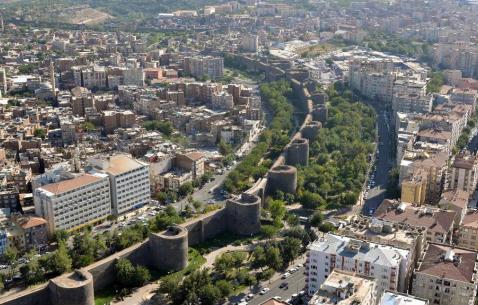 Situated on the banks of the river Tigris, Diyarbakir is an ancient south eastern Turkish city full of lively spirit. It is renowned for its Black Basalt Walls, Arab style architecture and is a culture hub for the Kurdish population. With the growing restoration and development programs, this self-styled Kurdish capital is rising its horizons of the tourism industry, thus appealing to a lot of Turkish as well as foreign travellers.

The city cherishes a long history that dated back to the Pre-Roman era. It served as a capital to many empires like Sumerians, Akkadians, Assyrians and the Medians. Later, it acquired the status of a large province when it became a part of the Ottoman Empire. The city was highly disturbed during the World War I with issues like Armenian Genocides and the Kurdish Rebellion.

Diyarbakir takes pride in its Basalt walls constructed around the old city, stretching for 5.5 kms with four gates and 82 watch towers. It is said to be the second largest city walls after the Great Wall of China and the most important of places to visit in the city of Diyarbakir, probably becoming one of the reasons why the city is on the vacation planners of many tourists today.

Amongst other things that will fascinate you about Diyarbakir are a number of medieval mosques and medreses that will leave you captivated with their architectural excellence.

Besides visiting all the tourist attractions, one thing you wouldn’t want to miss is tasting their delectable cuisine which involves lamb infused with aromatic spices. Also look out for their famous Watermelon festival and set your itineraries accordingly.

Essential travel information and Diyarbakir tips for your visit

Plan Your Trip To Diyarbakir

The best tours and activities in the city, guided by experts to give you a local insight to the best of Diyarbakir