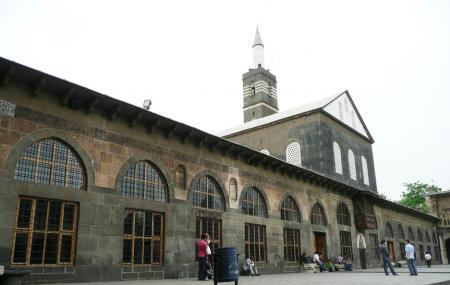 Mesopotamia is often referred to as the cradle of neo-civilization and the Diyarbakir Ulu Camii is an existing symbol of Anatolia’s rich heritage. Located in Turkey’s religious capital, the mosque is one of the oldest and slated as fifth holiest in Islam for worship.

Diyarbakir Ulu Camii was built by the Seljuk emperor, Malik-Shah in 1091. Highly influenced by Damascus’ Ummayad Mosque, the present structure is built over a 5th century church which was toppled by the Muslim invaders in 7th century. It is made of black basalt rock and limestone bearing a strong influence of the Syrian architecture. The pillars and the main building suffered extensive damage in a fire that broke out in the year 1115.

More than 5000 worshippers can pray in this huge mosque at a time. The western façade looks similar to the Roman Amphitheatre with its column and sculpture mouldinga. An Ottoman ablution fountain called Saardivan and a “must-see” sundial adorns the courtyard. Unfortunately no inscriptions exist from the original construction and there are only records of reconstruction and modification that have been inscribed in Kufic.

How to Reach Diyarbakir Ulu Camii

Love this? Explore the entire list of places to visit in Diyarbakir before you plan your trip.

Fancy a good night's sleep after a tiring day? Check out where to stay in Diyarbakir and book an accommodation of your choice.