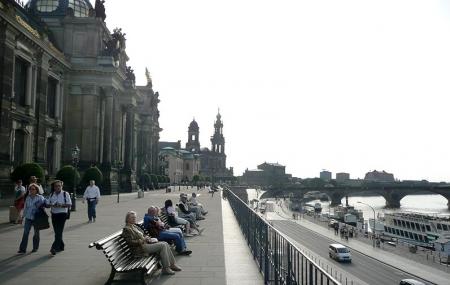 Nicknamed ‘The Balcony of Europe’, Bruhl’s Terrace is one of the most popular places to visit in Dresden. High above the river Elbe, one can catch some stunning glimpses of the city as well as marvel at the various architectural beauties that were created under and on the terrace such as the Dresden Fortress. You can stroll down the promenade, sit and watch people go by and grab a coffee while enjoying a peaceful day. North of Neumarkt square and the Frauenkirche, this site is easy to find and easy to fall in love with.

The Terrace was originally built as fortifications, as a part of a structure designed to protect the city from intruders. Between 1738 and 1748, a minister named Henrich von Brühl transformed the ramparts into a garden with terraces.  Because of this as well as Bruhl’s contribution to the King’s court, such as the creation of a betterment tax, the whole terrace was gifted to him, thus its name. After the occupation of Dresden by Russian troops, a giant staircase was created in order to connect the Palace grounds with the terrace and was opened to the public. The staircase was created with sculptures depicting the four seasons decorating its pillars. This area was thoroughly destroyed during World War II and was rebuilt later to resemble the original collection of buildings as much as possible.

There are various places worth exploring within the Terrace area. The Academy of Fine Arts, the Albertinum, the Semperdenkmal and the Rietschelmonument is enough to send any art lover into spasms of pleasure. The former state parliament building, the Standehaus, and the Secundogenitur are points of interest for history buffs. Underneath the Terrace, lies the most intriguing of all the buildings, the Dresden Fortress. Created as a ring of walls surrounded by a moat, this is probably the oldest structure in the city and dates back to the Renaissance period.  This is also home to the city’s oldest standing original city gate which is nearly four centuries old. You can see medieval defense systems, small bastions and explore mysterious vaults that stay hidden within the walls of the fortress. The most significant part of the terrace is, of course, the gardens. It was in the Bruhl Garden where Johann Friedrich Bottcher discovered European Porcelain, a finding that proved to be so valuable that it was nicknamed ‘White Gold’.

There’s a lot to see on the terrace. On one side, you’ll be greeted by the Elbe river and on the other, an array of majestic buildings. One can frolic through the gardens and study floor markings that depict the planets in the solar system. One can take refuge under the shade of the trees growing there and avoid an angry sun if you visit during the summer. If you’re lucky, you might come across an open air concert. It’s hard to imagine this beautiful place as the pile of rubble it was once reduced to today, as the Terrace stands proudly in all its glory. Also, visit the popular attractions in the city by following Dresden itinerary 2 days.

How to Reach Bruehl Terrace

62.69% of people prefer to travel by car while visiting Bruehl Terrace

People normally club together Frauenkirche and Pfunds Molkerei while planning their visit to Bruehl Terrace.