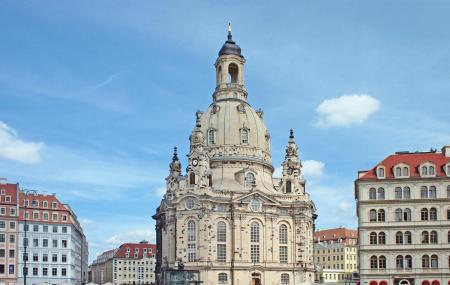 What was a pile of rubble for almost half a century is now one of the most beautiful sights to see in the city of Dresden, namely the Frauenkirche. With its enormous dome, beautiful Baroque architecture and the 360 degree of the city that it provides, this Church is one of the highlights of the city. It’s also quite the attraction for lovers of art and architecture as well as history buffs, besides those who wish to offer up prayers.

A Romanesque styled church was built in the 11th century and was the seat of an archpriest until the Reformation, after which it became a Protestant church. This structure was torn down in 1727 and another, larger building was created. The Frauenkirche that we are familiar with, complete with magnificent dome, was constructed in 1743. It was designed by George Bahr and thanks to his sense of aestheticism combined with his interpretation of the new Protestant spirit, the resultant structure was a beauty to behold. With an altar, pulpit and baptismal font that is directly in the line of view of the congregation and ‘Stone Bell’ dome which is one of the largest in the world, this structure soon became a well known symbol for the city.

The church was built to defy any attack, with a witness saying that the dome withstood 100 canon balls fired at it during the 1760 Seven Years War. Sadly, during the time of World War II, the building collapsed due to heavy firing from the Allied side and was reduced to rubble. The structure that was once an iconic part of the skyline of Dresden, had fallen. Public sentiment stopped authorities from turning the area into a car park, instead making it a memorial against war in 1966.  The site became a meeting point for peaceful protestors who were against the division of Germany. Finally, after the afll of the Berlin Wall and the re-unification of Germany, the people of Dresden decided it was time to re-construct the church. Preparations for the same started in 1993, with funds being collected from public donors.  The original design plan by George Bahr was used, as was building material that was salvaged from the original building. The builders relied on pictures of the original church and it was finally completely in 2005. The church was reconsecrated in October, 2005 amid joyous celebration.

Ever since then, the new church has become a very popular tourist destination. Millions of people have visited the church since its opening, to attend worship services as well as just to view the iconic structure. The interior is like an opera house, complete with circle, galleries and boxes. Numerous concerts are held here throughout the year and it is frequently the venue for the Dresden Festival. Before visiting, it’s advisable to call them up and check out their schedule. Whether you want to watch a concert, appreciate art, absorb some history or offer up prayers, the Frauenkirche should be a must on your list. Also, visit the popular attractions in the city by following Dresden itinerary 1 day.

How to Reach Frauenkirche

58.56% of people prefer to travel by car while visiting Frauenkirche

People also prefer to start their day with Frauenkirche.