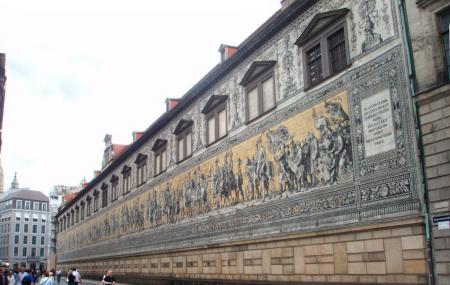 Find hotel near Procession Of Princes

The Procession of Princes, also known as Furstenzug, is a mural painted in tribute to the ex ruling family of Saxony, the Wettin Dynasty. The mural was painted on a wall that stretches on for 102 meters along the Augustusstrasse between the Frauenkirche and the Hofkirche. The painting depicts 93 people, including 35 noblemen, Margaves, Electors, Dukes and Kings, some on horseback and some on foot, with the names of each individual emblazoned underneath. The background glows golden with each figure painted in black and white. The mural is one of the few attractions in Dresden that barely took any damage during World War II.

The outer wall upon which the mural was painted was built in 1589. The history behind the mural dates back to the Middle Ages, when knights would joust in tournaments. Events of such a nature took place in the courtyard of the royal palace. Today, a variety of cultural events are hosted in the same courtyard, though of a much less violent nature. Painted by artist Wilhelm Walther between 1872 and 1876, the mural was created in honour of the 800th anniversary of the House of Wettin. Originally, there was already an image of a parade painted on to the wall but it had started to fade. Due to the lime wash it was painted with and exposure to natural elements, the painting began to lose colour. It was on top of this that Willhelm Walther painted his mural. Over time, that too began to fade and deteriorate, which led to the picture being replaced with Meissen porcelain tiles in 1904. It took 23,000 tiles to recreate the image. Perhaps it is due to the strength of these tiles that the mural was barely damaged by the aerial bombardment of Dresden during the Second World War.

The painting depicts 35 noblemen, from the 12th century till the 20th century. These Kings and Dukes are represented riding on steeds and playing various musical instruments in a grand procession, flanked by scientists, artisans, artists, farmers and children on foot. The artist drew himself in as well, as the last member of the parade. Each royal member of the image has his name and title mentioned below his likeness, which makes this piece of art educational as well. It’s worth visiting the mural and learning a bit about the noblemen immortalized on the wall. Open for all to see, this is a great visual reminder of the passage of time. Also, visit the popular attractions in the city by following Dresden itinerary 1 day.

How to Reach Procession Of Princes

94.77% of people prefer to travel by car while visiting Procession Of Princes

People normally club together Semperoper Dresden and Pillnitz Castle And Park while planning their visit to Procession Of Princes.